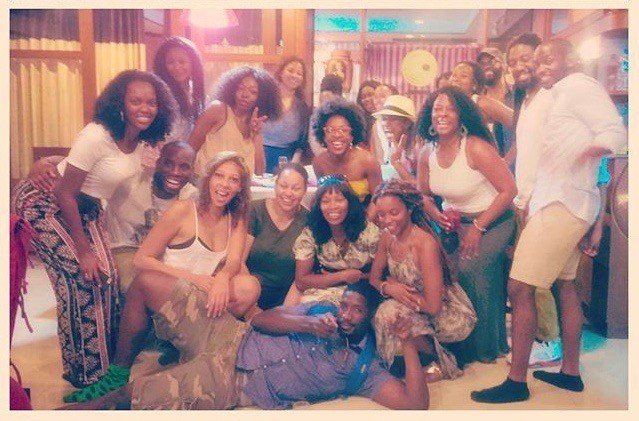 TRAVELNOIRE HELD A THANKSGIVING SOIREE THAT WE WERE LUCKY TO ATTEND. SHOUT OUT TO THEM.

Note: This post was originally posted on One Black Expat written by Cordelle Smith

Where the hell is Thailand? – My close homeboy after I told him I was moving abroad

It’s been five months since I first touched down in Thailand, and I can safely say that moving abroad was a good idea. Sure I’m missing out on a lot of memories that my friends and family are creating back in the States, but my move has encouraged them to fly out to Southeast Asia to pay Erica and me a visit.

My mom and sister just left about a week ago  after staying for 10 days, and we had a ball. My homeboys are next up, and they acquired their passports just for this trip. With their first time leaving the United States being 19+ hours of flight to Thailand, I’m using this post to educate them a little before they get here.

There is a jewel or two below that most Black men can use if they are planning a trip to Chiang Mai (or Thailand in general), so I put it in a post. Let me know if any of this info helps you out:

Bring cash – Unless you’re sure that your bank will let you withdraw money out of Thai ATMs, bring your spending money in cash and just trade it out once you get in town (not at the airport if you can help it).

The exchange rates are best if you’re dealing with cash, and the ATM fees associated with the withdrawal by both the Thai bank and your bank are outrageous.

Your money goes a long way in Chiang Mai, so you don’t have to break the bank to have a good time and bring back some souvenirs for the family. The average meal is less than $3 dollars, and the price of almost all goods and services can be haggled. Head to the Saturday or Sunday Walking Street for the best goods at the best prices.

They can’t cut it – My hairline hasn’t been the same since I left Atlanta. A Black man’s relationship with his barber is one of the most sacred bonds on Earth, most lasting longer than the average marriage.

I’ve been to five different Thai barbershops, and I’m done trying. I have some clippers that I brought from home that I plan to put to use as soon as my hairline recovers from the last tragic attempt at a temp fade by one of the barbers out here.

He was doing a solid job for about two weeks, but the last cut has me on Lebron status.

Bring some clippers from home if you treasure your appearance or make sure your fitted cap game is on point.

Save your kicks – Speaking of appearances, you know those favorite pair of shoes you pull out when it’s time to get fresh? Leave those at home. You are better off just looking good from the ankle up, trust me.

These Chinese tourists have no problem unapologetically A-town stomping any foot that gets in their path whether on the street, the bus, or your favorite tourist trap (I’m not racist but they are the main perpetrators, all facts). Also, Chiang Mai and other cities here are very walkable, so bring the raggedy Converses from the back of the closet, or better yet opt for flip flops.

A lot of places require you to remove your shoes before entering, so this will save time. If I’m not working out, you can catch me with my toes out and free in some flip flops. It’s the Thailand way.

Yes, Black people come to Thailand – Compared to the total population of Chiang Mai we make up a minuscule proportion of the people, but there are still more black people here than I would have thought.

When I run into another brother, the initial shock on both our faces is usually followed up with “What are you doing out here?!” For the most part I become fast friends with my fellow Black Thailand inhabitants, as most of them are personable and friendly. There are the few who aren’t as receptive to my extended dap-ready hand and engaging smile, but it’s their loss.

My wife and I have a small group of Black friends that we get together with weekly to exchange ideas over drinks, so if someone you know is in the area shoot me an email and I’ll buy you a beer. Just know if you’re planning a trip or stay in Thailand, (Michael Jackson voice) you are not alone.

Bring an open mind – Coming to Asia is a culture shock in every sense of the word. There are a couple of things you just have to accept when you drop yourself into this foreign land: people will stare at you out of fascination and it’s not considered rude here.

The people who prepare your food may or may not wear gloves. The sun resides here and will cook you slowly if you stay outside too long some days.

The 12-hour time difference between here and the States is very inconvenient. Sometimes Chiang Mai just smells bad (not the whole city, but there are pockets of funk). Liquor sales stop at midnight (unless you know people). Mosquitoes here will bite you through the thickest of materials. Unless you have a teflon stomach, the food can sometimes be bubble-gut-inducing.

The most convenient way around town is in the back of a pickup truck converted into an open-air taxi/bus combo. I could go on but the point is that it’s different out here so be ready. Have an open mind and embrace the culture, and I can assure you that you’ll have a ball.