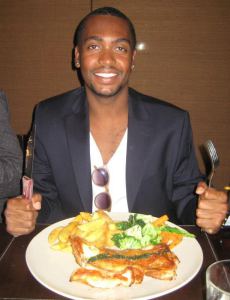 (Note: This post is not a critique on Peace Corps as a whole, yet, a simple anecdote which explains what I experience on a daily basis as a dark-skinned black male living in Peru)

I am a black male. Furthermore, I am a dark-skinned black male. My skin color has not only directly affected how I view myself personally, but my dark skin also affects how the world perceives me. We as a worldwide society need to acknowledge that we live under a system of racism / white supremacy where people of color, in particular of African descent, are denied their fundamental human right to live freely without oppression.

Growing up in America I was hit with this cold fact from a young age where I was discriminated in kindergarten all the way up thorough receiving my master’s degree. This aside, I was limited to the scope of my interactions with racism within the American context and as I currently am serving in Peru as a Peace Corps volunteer, racism has continued to show its ugly head several times over.

On June 4th, 2014 I left the United States to begin serving in Peru as a “Community Economic Development” volunteer with the Peace Corps. I was amongst a group of 40 bright individuals from varying backgrounds.

The majority of us were college educated, under the age of 30, with previous international work or travel experience.

On paper one would think that this was not truly a diverse group of people based on our resumes and credentials. But if you were to look at us person, you would quickly realize that we were a very diverse bunch as there was a mix of African, Indian, Hispanic, and European decedent Americans within the group.

Not knowing what we were getting ourselves into at the time, I for one could not foresee how quickly our physical appearance’s would affect how we were to be perceived by Peruvians once we arrived in country.

You can call it ignorance, but unless you already have experience with something you truly have no clue what to expect. Little did I realize that being a dark-skinned black male would quickly separate me from basically everybody else within my group.

Throughout my Peace Corps training I quickly began to realize that very little was done to touch the racial aspect of living in Peru as a foreigner. The majority of our diversity related trainings were centered on topics such as gender-equality, LGBTQ rights, and machismo (male dominance in Peru). Of course, the topic of being a gringo (Spanish slang for American, typically being white) was briefly explained but very little was mentioned to us about anything relating to skin color and how

Peruvians may perceive you as a non-white American. I soon began to question the quality of our diversity training only to realize that being a dark-skinned black male or furthermore, a non-white volunteer was not the norm.

According to the Peace Corps most recent fact sheet:

Additionally, to paint a background into race relations within Peru all one has to do is simply turn on his television or read the newspaper. From first moments glance you can quickly notice how the majority of images portray white – to light Peruvians in a glamorous image. Pretty much any celebrity, television show, or non-sports related figure is white or very light skinned. Extremely popular television shows such as “Esto es Guerra” or “Combate” even go as far as to import white/ light contestants from other countries to maintain and perpetuate a glorified European image.

Furthermore, Afro – Peruvians are seen as a completely separate cast, another otherworldly culture which has yet to be fully accepted into the mainstream whole. Based off of my research and work findings it is nearly impossible to count the number of Afro – Peruvians who live in Peru because it is not legal to racially categorize yourself as Afro Peruvians in some of the modern censuses.

Even outside of the “Afro” realm, it seems that other brown skinned Peruvians apparently seem to enjoy the damaging images of media in the form of comedy that degrade their Andean (non-European) heritage with characters like “Paisana”.

Fast-forward to today and my good old friend racism came out to greet me with a friendly stab in the back. I was simply riding the bus from my town to the regional capital which is about a 45 minute commute. I used the same large bus that I normally use and all seemed normal – a brown-skinned Peruvian with tattoos sat next to me, the bus filled to capacity, and were on our way.

Within seconds I was abruptly questioned, had my face pushed into the hood of the car, and inhumanely searched in the middle of a highway in front of the bus and all the passengers.

Without any dignity, the police officer accused me of conspiring to traffic contraband and attempted to extort me of what little money I had on me. I provided all three forms of my American identification (passport, and two identity cards) but in his eyes I was not human, but merely some black criminal who did not belong in his country.

Now you may say, “wow Craig, I am sorry, this does not happen much. Just forget about it and have a nice day.” Unfortunately, in the past year this situation has reared its ugly head not once, not twice, but more than three times! Because of my dark-skinned complexion I have:

Being a dark-skinned black male in Peru is a struggle. One in which I have to experience alone. No matter where I am in this world I constantly have to be more cognizant, sharp, and awareness of my environment that other people. It is a shame that such a despicable, violent, and unjust system of racism has perpetuated itself unto a level which causes other dark-skinned ´people to detest and discriminate their own kinfolk. Nobody said life is fair, but as humans who live within a manmade construct we have the power to make or break the mental chains that confine us to such barbaric and inhumane principles. I think this quote from the movie Boyz in the Hood is quite fitting to end my post:

“Yo, cuz, I know why you got outta the car last night… shouldn’t have been there in the first place. You don’t want that shit to come back to haunt you. I ain’t been up this early in a long time. I turned on the TV this morning, they had this shit on about… about living in a violent world. Showed all these foreign places… I started thinking, man, either they don’t know, don’t show, or don’t care about what’s going on in the hood. Man, all this foreign shit, and they didn’t have shit on my brother, man…”