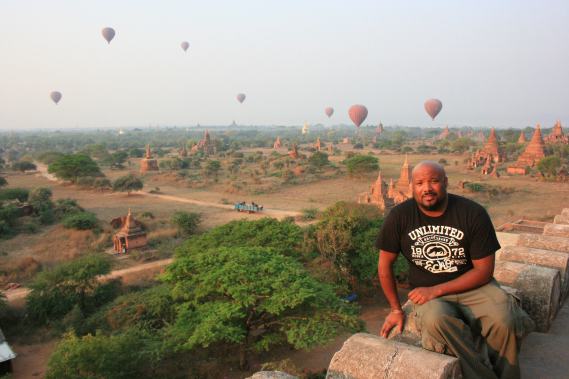 Meet Brian Williams, an American Expat, who has spent 8 out of the last 16 years living and traveling overseas including a year in Botswana in Southern Africa. Brian recently returned to America after 6 years living in Korea and one year backpacking around the world. He recently completed a book on Korea and his life there as an expat, something he hopes will be published later this year so keep a look out for “Stranger in a Stranger Land: My Six Years in Korea” or check out his excellent blog, Netsidebar.com.

I’ve recently returned to America after 6 years in Korea and a year backpacking around the world. To say I’m dealing with some kind of reverse culture shock would be a huge understatement.

What made you move abroad?

The short answer was the economy. I graduated school in 2008. Need I say more?! Long answer? I caught the travel bug early on during my visit overseas trip when I was 18 and always said if I could find a way to combine travel with earning money, I’d do it.

What ‘s the most difficult thing about living so far from home?

I’m guessing this is what everyone says. It’s being away from friends and family and missing out on big events like weddings and stuff. But the hard truth of life is you can’t have it all and at least with traveling you come to appreciate the people you miss all the more and are, hopefully, better at making the most of it when you get to spend time with them.

How did you make friends when you first arrived?

Western Bars. I didn’t realize there was any way a bar could be set up, but by Asian standards a bar is a place to sit with friends, not a place to walk into alone, grab a beer and strike up a conversations. Luckily, Korea had a few Western bars and Westerns congregated there. For me, that was all I needed.

What do you love about being an expat?

I liked hanging with other expats. People who are willing to travel halfway around the world for work have a fair amount in common, I find. An expat community can also be pretty diverse. Korea’s had a decent representation of people from six different countries with a few more popping up from time to time.

Has anything funny happened to you due to cultural differences?

Well, as  a large black guy, I can say it wasn’t unheard of for a random person to stop me on the street and ask for a picture sometimes. But one time I wore an American football jersey out and I guess people thought I was actually a player or something. 50 different people asked to take pics with me. It became very annoying and I never wore that jersey out again, but in hindsight it was pretty funny.

How do you cope when things are going badly?

No matter where you live and what you’re doing, you’re going to have a bad day sometimes and a bad day can feel way worse when your thousands of miles from home. The way I dealt with it was a call home to hear a familiar voice or, more likely, heading to my favourite expat hangout where other expats are pretty accepting of the idea that people need to vent from time to time.

Is there anything about your adopted country that drives you crazy?

Sometimes with Korea it’s like where to begin. There’s pushing in just about any crowded space. There’s no such thing as personal space and seemingly no suggestions from an underlining will ever be acted upon at work because that’s just not how things are done in Korea. This is to say nothing of the blatant racism that can literally be seen in job ads that ask for whites only.

What can you do in Korea that you can’t do back home?

The most important thing is being able to walk around safely. Korea is insanely safe. And, as a black man, I can also say I don’t fear the police in the slightest. It’s something you can’t take for granted. The other big thing is you can drink in public. Simply put, it’s great.

What are your future plans?

In what I believe to be classic expat fashion, I don’t know. I’m not sure where I fit in, anymore. I sometimes miss my home country, but I love the expat/international life I have gotten used to. The only thing I feel certain about saying is that I’m likely going to keep moving around every few years.

If you could give one piece of advice about moving abroad to find work, what would it be?

Do it! If you’re not going into debt, to work than you’re likely a leg up on working back home. Being an expat gives you a great excuse to cut back on your consumption and you’ll find you can get by on way less than you think. The next thing you know, you’re having a great time overseas, traveling more often, buying less junk and putting away more money than if you were just staying put in your hometown buying every new thing that comes out. So yeah, do yourself a favour and an some adventure to your life.

(via Journalist on the Run)