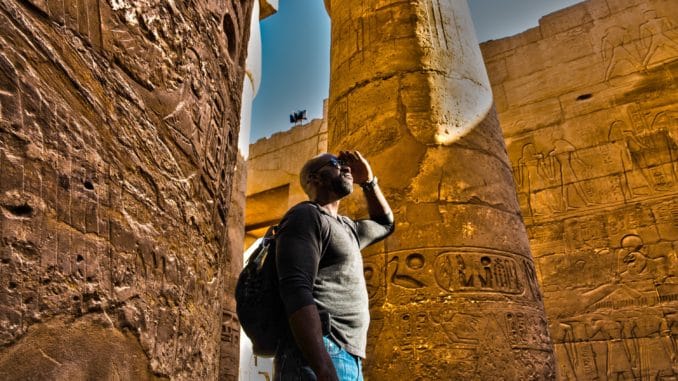 American Black men have been traveling out of the country since World War 1.   First it was soldiers fighting in the Great War and then hanging out in France.   They got to see a different type of woman than what they were used to dealing with.  Since that time there have always been brothas who got tired of dealing with issues in America whether it was in the greater society with racism or in the Black community where things were not as harmonious as people may have been led to believe.     Black men really began to travel out of the country starting in the sixties when civil rights legislation opened up more job opportunities thus giving Black men more discretionary income.

Fast forward to 2018 and Black men are taking the opportunity to travel all over the world.  In general this gives American Black men the ability to get a bigger perspective about the world we live in.   On another level it gives brothas the chance to seek relationships whether sexual or romantic with women from a wide variety of cultures.   Indeed many brothas seek out these relationships.

I don’t need to go into detail about the issues that American Black men and women are having in relating to each other.   In response to these issues many brothas have voted with their feet and decided to seek love and sex in other countries.   It’s really a smart move.   Many Black men who are considered not tall enough, not handsome enough, not cool enough, or any enough (insert reason here) can go to another culture and be treated like a king.   One reason for this is that in many cultures the factors that would cause a Black men to be rejected in America are celebrated in other places.    Black men are going where they are celebrated.   Even then Black men still have to be on their game.

First let me explain what I mean by “game.”   It doesn’t mean a Black man is going overseas to get woman by deception.   It just means brothas need to keep their eyes open.   Just because other countries and cultures have what I consider to be more civilized criteria for choosing a man doesn’t mean all the women are righteous.   I have heard horror stories of men getting a woman from overseas and getting taken advantage of or even getting robbed.   One common story is of men marrying a woman from overseas and then bringing her to the United States.

Usually the story goes that the woman was very cooperative in her home country especially if the man was actively courting her.   The man marries the woman and brings her back to the US and then in about six months she seemingly undergoes a personality change.  This cooperative woman all of sudden becomes Americanized with all the bad attitudes included.   Men naturally blame it on her being exposed to US culture.   Naw playa.   She was like that at first.  She was hiding her true personality to get what she wanted.   Brothas going overseas have to learn to see past masks.

At the end of the day women are women.   The culture may change but there are still bad apples who are looking to take advantage of a brotha.   These women watch the news and have access to the same social media.   Many are also in situations where they have to be pragmatic.   All of sudden this western man with money shows up who can alleviate their situation and help them get US citizenship.   Some women may be content to stay in their country and just get an American man to send them money.   Whatever the situation they are looking to get over on an unsuspecting brotha.

Now with all that said Black men can still find a sincere woman overseas.   Many may need to as western culture in general and many Black women in particular, seem to have something against successful Black men.   The key for Black men is to remember that scammers are universal.   Even overseas Black men have to stay on their game.

Rom Wills is the author several books including the international bestseller, Nice Guys and Players.   Rom’s books can be found at www.romwills.com.