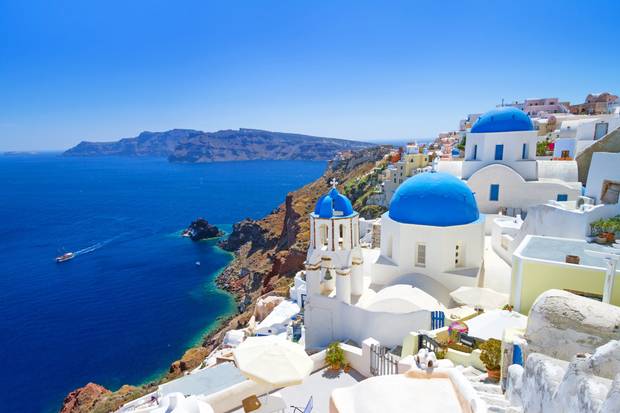 In 2017, the deadly attack on Bakari Henderson made brothas skeptical on visiting the Greek Islands and Greece in general. I recently traveled to Zakynthos Island, the same Greek island where Bakari was killed and I felt safe there.

Greece is actually ranked the 39th safest country in the world and a large percentage of Greece’s income is dependent on tourism. Greece does have an unfortunate refugee crisis but in my opinion, it doesn’t put Black American tourists in danger. If Greece is a hot spot for Black women than it should be a hot spot for the brothas too.

Now despite Greece being pretty safe, there is still a raw and unsafe element on Zakynthos Island. On the shuttle from the airport, the first thing I noticed was how dirty the island is. The area is occupied with the locals. The streets are filled with trash, stray cats, overgrown weeds, poorly maintained infrastructure, etc. Now the island is a little cleaner closer to the tourist areas but nothing special. After a full day of exploring the island, I noticed that I haven’t seen any police or security roaming around. It was like the Wild West and I’m sure the closest police station was miles away. After this realization, I started thinking “If shit pops off here it can get ugly real fast.” Unfortunately, Bakari became a victim of the Island’s unsafe element.

I traveled to Zakynthos with my wife and she is white. Now the reason why I’m telling you guys her race is because we all know the reason of his slaying. A group of insecure white men killed Bakari because they were jealous of him taking photos with a white girl. When my wife and I were walking around Zakynthos, I didn’t notice any hateful stares. We only got the regular “curiosity glances.” I also noticed that she and I were not the only interracial couple there.

The Greek Islands are a popular travel destination for British tourists and there were plenty of them there in Zakynthos. If you guys know anything about the Brits then you know they love to party and drink. The Brits have a big drinking culture and when they’re on holiday they go even harder! My hotel was a 5 minute walk from Alykanas Beach. The beach was filled with mostly British families during the day and British party goers at night. During the day we mostly sat by the pool or on the beach. My wife convinced me to chill with her in the hot ass Greek sun just so she can get a tan. SMH! White women are obsessed with getting tanned! (lol). At night, we hung out with some Brits and drank with them. Brits are always fun to party with and their accents are even more hilarious when they’re drunk.

The Greek Islands are known for being party islands but the nature there is jaw dropping! You’ll definitely get Instagram worthy pictures here. I was amazed at the clear blue water, white sand, and the breathtaking views of the mountains. I have been to many beaches in the USA but none could compare to this beach. For the first time ever in my life I swam in the ocean! In the past, I wouldn’t dare step foot in the water. My motto has always been, “If I can’t see in the water then I ain’t swimming in it!” Also, if you’re the wild and adventurous type then you can rent four wheelers and jet skis to ride. I had chill vibes the entire trip but maybe next time I will get more adventurous.

I had a great time on Zakynthos Island and I will definitely be going back there. I would like to also visit Athens and other Greek islands in the future. I felt really safe in Greece despite the police not being around to keep the tourists safe.

Born and raised in Newark, NJ. Lived in Los Angeles, CA for 11 years. Lived in Houston, TX for a year prior to moving abroad to Helsinki, Finland.

I always wanted to travel the world but I was stuck in the rat race of corporate America. On Christmas day 2018, I had a life changing and life threatening experience. After a night of drinking and celebration, I decided to walk to the store at night to buy cigarettes and an armed robbery tried to rob me. I only had like $9 in cash and my iPhone. In my stubborn, intoxicated, crazy, Krav maga trained mind I decided to put my life at risk instead of giving up my belongings and I disarmed the armed robbery. The guy had 15 bullets in the Smith and Wesson 9mm pistol and thank God I am alive today. After that day, I made a promise to myself that I was leaving America by any means necessary. I put my life into deep perspective and I told my lady friend of 7 years (who's my wife now) that I was coming to Finland.