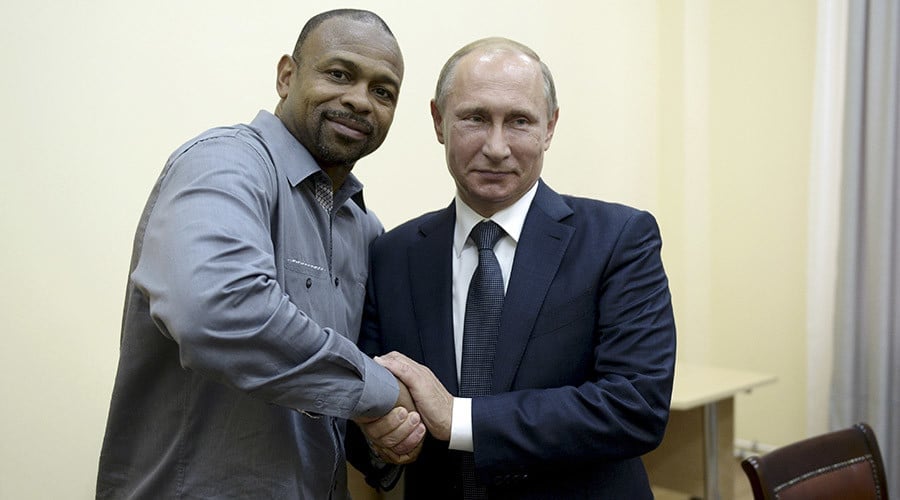 Russian President Vladimir Putin (R) meets with U.S. boxer Roy Jones, Jr. in Sevastopol, Crimea, August 19, 2015. REUTERS/Aleksey Nikolskyi/RIA Novosti/Kremlin ATTENTION EDITORS - THIS IMAGE HAS BEEN SUPPLIED BY A THIRD PARTY. IT IS DISTRIBUTED, EXACTLY AS RECEIVED BY REUTERS, AS A SERVICE TO CLIENTS. - RTX1OTSF

Read the full story below:

MOSCOW — Vladimir Putin has given Russian citizenship to former world heavyweight boxing champion Roy Jones Jr.
A decree published on the Kremlin’s website in the Russian president’s name Saturday said the American, a four-weight champion once regarded by many as the world’s best boxer, had been given Russian nationality.

Jones asked Putin for citizenship in August over a cup of tea when they met in Crimea — the territory annexed by Russia last year — saying it would make doing business in Russia much easier.

Putin said this would be possible if Jones planned to spend a significant part of his life in Russia, while the boxer said he hoped sport could help “build a bridge” between the U.S. and Russia.

After the decree was published, Jones told Russian news agency R-Sport that he planned to learn the Russian language.
“I want to speak so well in Russian that people understand me without any problems,” Jones said. “I think that’ll take about a year. I hope that next year I’ll already be speaking like a Russian.”

He added that he now wanted to “earn two or three billion dollars,” open boxing schools in Russia and develop his rap career.

Still fighting at cruiserweight against mostly little-known opponents, the 46-year-old Jones has competed three times in Russia in the last five years, most recently knocking out Egyptian fighter Hany Atiyo last year in the southern city of Krasnodar.

While Jones insists he has no plans to hang up his gloves and still wants to win a world title, he has also begun working as a trainer for Russian fighters — including unbeaten WBA super middleweight champion Fedor Chudinov and his brother, ex-WBA interim middleweight champion Dmitry Chudinov.

God bless Mr. Jones for opening his mind and seeing life outside the United States matrix. If you haven’t swallowed the red pill yet, then ExpatKings is here to help you make the transition.

Whether it’s Brazil, Russia, or Thailand, I believe foreign countries offer the Black American man a better quality of life than the United States of Assholes.

What do you think? Did Roy Jones Jr. make the right decision? I’ll be visiting Russia sometime soon. Hopefully I get a chance to meet the boxing legend!