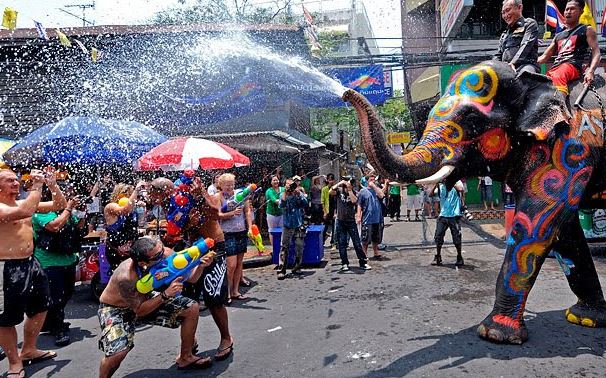 Securing the fresh start for the future is something that you’ll only be able to find on the streets of Thailand during the new year festival called Songkran.

It’s the day when Buddhists pour warm water on their relatives in order to help them get clean from the bad luck and misfortune, among the number of other traditional occasions which take place on the festival.

Three days in April is all that it takes to enjoy this amazing and relaxing mix of culture and mesmerizing landmark.

During the three days in April (13th- 15th), it’s expected to fully cease any work of the citizens, considering how they will be occupied with their national holiday.

The symbolism of water will bring many foreign and domestic citizens who are fun-thirsty, out on the streets performing their usual rituals and enjoying in the sparkling atmosphere of the day.

Important thing related to the festival is also a Merit, visiting nine sacred temples. They are all more than worth visiting, proving again how much history can contribute to the society nowadays by conquering all the differences even if it’s just for a few days.

Wat Pho, What Phra Kaeo, Wat Boworn and many others will surely present themselves as the main starts of the following event.

Where to expect more fun?

During the heat strikes of 40 degrees, no visitor will be able to resist the temptation of taking one water gun, stealing a bit water from the buckets and enjoy few
minutes of water fight to cool down a bit.

If you want to go and see locals doing it, it is recommended to go to Silom in Bangkok where people have a chance to enjoy the view of 5 km closed road and unlimited crowd cheering while running from side to side to mark their own targets, shooting them from a water gun or even pouring water from a bucket.

Pattaya will again be doing Songkran unlike any other place, remarkable for its giant Songkran feast and party. Citizens here enjoy the festival so much that they can’t even stop when it reaches 19th, and they force the festival to move on to the whole week instead.

Spirits are really high and it can be expected even in 2019, following the previous year’s tradition, that Songkran in Pattaya will push the limits of water festival to the new levels.