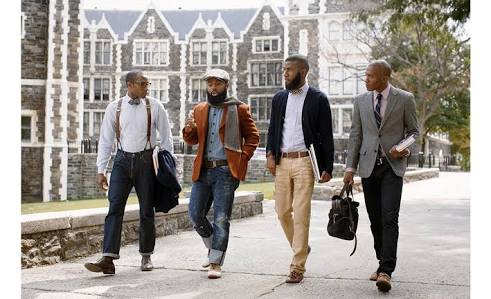 You’ve probably heard the common stereotype that Black men travel to places like Brazil, Colombia, Thailand, and South Africa because they cannot deal with a strong Black woman back home.

Black men who travel overseas are called as “sellouts” and “traitors” who should “man up” and find a good sista back home.

Is there any truth to this statement?

I’ve spent a lot of time recently in Southeast Asia and have seen a lot more black tourists and expats in 2017 than when I started traveling in 2009.

There is definitely a black male travel movement going on and it’s getting bigger every year.

Yes. I agree that black men are spending more time and money overseas but I’m not sure if it’s just because they don’t want to deal with black women. After talking to many brothas during my travels, black men are looking for more financial opportunity and feminine women.

What’s funny is many black men travel to places like the Caribbean, South America and Africa in search of younger black women with better attitudes.

Black women in Brazil, Colombia, The Gambia, Dominican Republic and other similar countries not only have better attitudes, but are much more friendly and easy to get along with.

I rarely come across a foreign black woman with the same character traits as black American women do. It’s such an uncommon occurrence that I really shocked when foreign black women act like their American counterparts.

Black american women have an awful reputation around the world for being loud, aggressive, and just plain mean. Black men have known this for years and now they are voting with their feet and passports.

Western civilization is under serious attack due to several factors including a corrupt financial system, terrorism, racism discrimination, illegal immigration and a whole lot of negative karma.

My recent article about the Barcelona Attack shows how the United States and Western Europe are being targeted by terrorists on a regular basis.

United States debt levels are at an all-time high and illegal immigration is taking jobs and opportunity away from natural born American citizens.

Countless police shootings are causing American citizens to fight back against the same people who are supposed to protect and serve.

Black men who travel understand that western society is not what it used to be. This is causing many brothas to travel more and see what else is out there.

Black Women Get Their Power from White Male Domination

Why is the ship sinking? Because white male domination is under attack in western society. Muslims, refugees and immigrants are moving into traditionally white societies like North America and Western Europe, thereby threatening the white status quo.

Ironically, black women receive most of their social power in societies where white men dominate and control the resources. He is able to empower her through education, jobs and undeserved social benefits.

Black women in non-white countries act much differently because they aren’t rewarded with money and handouts while still acting like a complete idiot.

In order to make it big in places like South America, Africa and Asia, black women have to be smart, business minded and respectful of the society.

It’s not that black men can’t deal with black women. We understand that black women can use the judicial system in places like America to intimidate, imprison and bankrupt us.

What’s the Solution? Black Men Should Help Themselves Before Helping Others

Putting up with trouble & stress from western civilization is becoming too much for the modern day black man.

The more I travel around the world, the more I realize there are so many different places where brothas can build a foundation, business, family and a rich legacy.

It’s time we started helping ourselves first instead of being the punching bag for modern day white society.

By helping ourselves, we also help black women because they are too victims of racism, prejudice, job discrimination and violence. However, they are too emotionally attached to the trinkets & little gifts given to them.

Not sure about foreign women? All you have to do is check out some of my past articles about places like Brazil, Colombia and Thailand to realize that foreign women are a serious threat to Black western women.

Globalization and the rise of online dating has opened a brand new playing field where you can connect with women from all over the world within seconds.

Why can’t Black women, in particular Black American women, rise to the challenge and step their game up?

I’ve lots count of how many times I met a brotha who dated a Brazilian or African woman and refused to deal with an American woman again.

Foreign women are definitely not pushovers, but they come with so many fewer worries and long term problems. Many of my worries and complaints as an expat overseas are nothing compared to the problems I faced while living in America.

To put it bluntly: international travel gives me unlimited options and I chose to exercise those options.