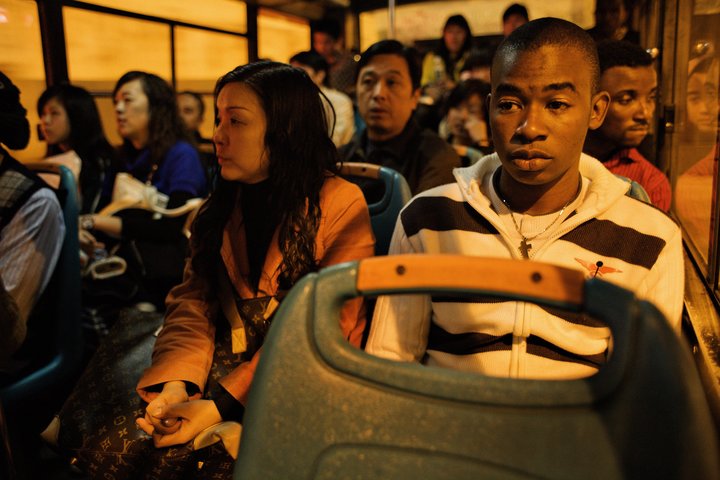 GUANGZHOU, CHINA - DECEMBER 17: African trader Nelson sits on a bus taking him home December 17, 2008 in Guangzhou, China. In Guangzhou, the largest city in south China, 20.000 Africans are trying to make a life for themselves as traders in wholesale markets. Here, they hope to carve out their own piece of the Chinese economical miracle. The traders buy clothes and other cheap goods to be shipped and sold back home. Approximately 80% of the Africans in Guangzhou are Nigerians, others are from e.g. Ghana, Kenya and Cameroon. (Photo by David Hogsholt/Edit by Getty Images)

The Black male travel movement is growing leap and bounds as more brothas are getting their passports, saving up their money and traveling abroad.

There are so many nice countries to visit but what about the worst countries for black men to travel and live in?

I’ve been getting emails about the most racist & hostile countries towards black men and compiled this list from my personal travel experience, speaking with other black travelers/expats and reading dozens upon dozens of personal travel stories across internet forums.

Here is a list of the worst countries for black men to Visit. Feel free to leave your comments and let us know which countries we should add or remove from the list.

Saudi Arabia has a long history of mistreatment towards black men (especially black men) and it tops our list as one of the worst countries to live in.

Foreign immigrants make up over 50% of the total workforce and are subject to mockery, physical & verbal abuse, assaults, rapes and even death by blunt force.

Not only are black men at risk but even Southeast Asian immigrants are targets of vicious crimes as well. Many African male immigrants are traveling to Saudi Arabia for economic opportunites, but don’t understand the racism mindset of the Saudi people.

You’ll be subject to constant mockery and classified as “lazy” and “monkeys.”

Even though many Africans have been deported from Saudi Arabia in recent times, many still report “modern day slavery” going on in Saudi Arabia. Here’s a video discussing the topic in more depth:

As for black male tourists, there are much better alternatives in the Middle east than Saudi Arabia.

United Arab Emirates is much more modernized, stable, and safer for black men who want to travel to the Middle East. Dubai is a beautiful city and a hotspot for black male expats and tourists.

Russia has a long history of racism against all group of foreigners, especially black men. Most well known for the growing Skinhead groups, Young Russia men patrol around the streets looking for black men to harass and attack.

Most of the attacks have been against African male migrants who fled their home countries seeking political asylum and job opportunities.

Ukraine and Poland are much better alternatives to Russia if you’re looking to explore parts of Eastern Europe.

China has always been traditionally hostile to foreigners in general and the Chinese government is gettting worried about the recent rise in black immigrants, particularly in Guanzaghou, China.

Due to the rise in black immigrants, the Chinese government has passed several laws making it hard for black men to own land, start businesses, open bank accounts or even rent a basic hotel room.

Another disturbing trend is the rise in black men becoming locked up in one of China’s many prisons. Black men are often attacked in public then jailed for lengthy prison sentences once they defend themselves.

Even if a foreigner hits a local or Chinese person in self defense, you are going to get screwed by the courts and the police.

Former Ball State football player Wendell Brown was sentenced to 4 years in prison for defending himself against a mob of drunk Chinese terrorists.

Also, there was a more recent attack against a Zambian college student for dating a Chinese woman.

There are some econonmic & job opportunities for foriegners who want to get involved in the import/export trade since China is one of the biggest producers of cheap, resellable goods in the world.

While China does offer some economic opportunities to foreigners, I think the country only appeals to black men who are willing to learn Mandarin and succeed in China despite all of their racist and hostile behavior.

Japan or Hong Kong are much better alternatives for black men looking to travel in the Far East.

Greece is well known for its hostile and racist attitude against black men. Their most recent deadly attack against Bakari Henderson, a 22-year man who just graduated from the University of Arizona, shows how tensions can flare against brothas in a heartbeat.

In fact, there are modern day lynch mobs patrolling around Greece going by the name of the “Golden Dawn Party” in an attempt to curb Greece’s ongoing immigration issues.

These terrorists target all immigrants of color including African, Pakistan and Muslim migrants.

The economy of Greece is struggling (just like much of Baltic countries) and racists are attacking black men due to their frustrations and lack of economic power.

While Greece remains a popular travel destination for black women, I think black men should reconsider Greece altogether or only visit for a few days then leave.

Spain, Italy and France are much better alternatives to Greece and you’ll feel much safer there as well.

Lebanon is well known as a non-friendly country for black men who are subject forced to work menial low paying jobs and live in the worst slums. Racism is alive and well against most non-arab people including Asians and Latinos.

Serbia is another country that is hostile towards black men and most of the Bakari Henderson attacks in Greece were Serbia, not Greek.

While Sweden is considered a haven for black men, reports coming back from Finland is quite contrasting.

Racism against black men is everywhere but certain countries are far worse than others. I hope to inform and enlighten brothas from all over the world about problematic countries before you visit them.